Background:
There are no HiFi shops within 200km radius of where I live at the SW tip of Spain.  I wanted an Amp which supported HDMI, AirPlay and Spotify, and, ideally, sounded better than the current aging amp.  So I did my homework and settled on the Yamaha RX-V673 for £450 from Richer Sounds.  I ordered it over the phone and went to UK to pick it up.  When I got to the shop, and they heard I had the B&W 685's they said the RX-A820 would be a better match.  I had about 20 minutes to decide.  I listened to them both in their audition room, and did a brief Google for reviews, then bought the RX-A820 and flew back to Spain. 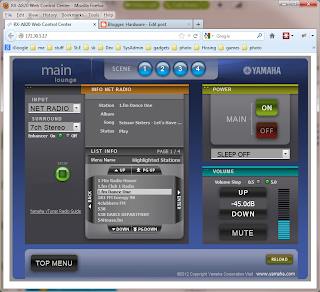 Once I figured out how to get anything other than "straight" 2 speaker mode from CD input, I tried various DSP modes with my favorite test album: Gish by Smashing Pumpkins.  NOTE: I am 45, and certainly don't have golden ears (Brass ears?).
Note:

I regret this purchase, and if I lived in UK, would try and swap it for the cheaper and better featured RX-V673.  Now I need to go and buy something which supports spotify, and NTFS media.

Within 10 minutes of switching on the am, it asked me if I wanted to do a firmware update.  I selected what I thought was no (its not clear), but it did the update anyway.  After about 15 minutes it said "ERROR 2000!" which is never a good sign.  Nothing responded, so I had to switch the unit off. On switching on, it simply says "ROM ERROR".   There was no interruption in the internet - I have 100% rock solid internet and had several connections (including VPN) open at the same time without issue, and am using a wired cable (cat 6) direct to the ADSL router.

Googling, I see that one can try manually installing a ROM via USB. It can be downloaded from here: http://download.yamaha.com/search/detail/?category_id1=16445&category_id2=16446&product_id=1663299&asset_file_language=EN&asset_id=57821&language=en&site=uk.yamaha.com

Taken from the downloaded instructions:

If you use the optical (Toslink) cable between the PS3 and Amp, you get 5.1 surround sound automatically.

If you want 5.1 (or better) with your movies through HDMI on the PS3, you need to make some changes.

Warning: it does say if you chose modes the AMP doesn't support, you may damage your equipment.  The A820 manual says this, which implies all modes are supported: 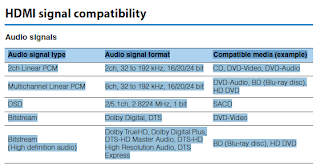 NOTES
Stereo Playback.
To use any mode other than "straight", which uses only your front two speakers, not even the sub, you need to lower your music output frequency to the minimum in the music settings. This is because the A820 cant handle the higher frequencies with any DSP or surround mode, not even 2.1.  Set it to this:
Settings->Music Settings->Output Frequency->48 kHz

Interestingly, my old cheap Denon had no such difficulty with the higher rates.

Simon Hobbs
Despite 20+ years in enterprise software development, Simon still manages to kitesurf and Stand Up Paddle with the cool kids. Kind of.